Regulatory Troubles Clamping Down on OTC and Other Healthcare Products 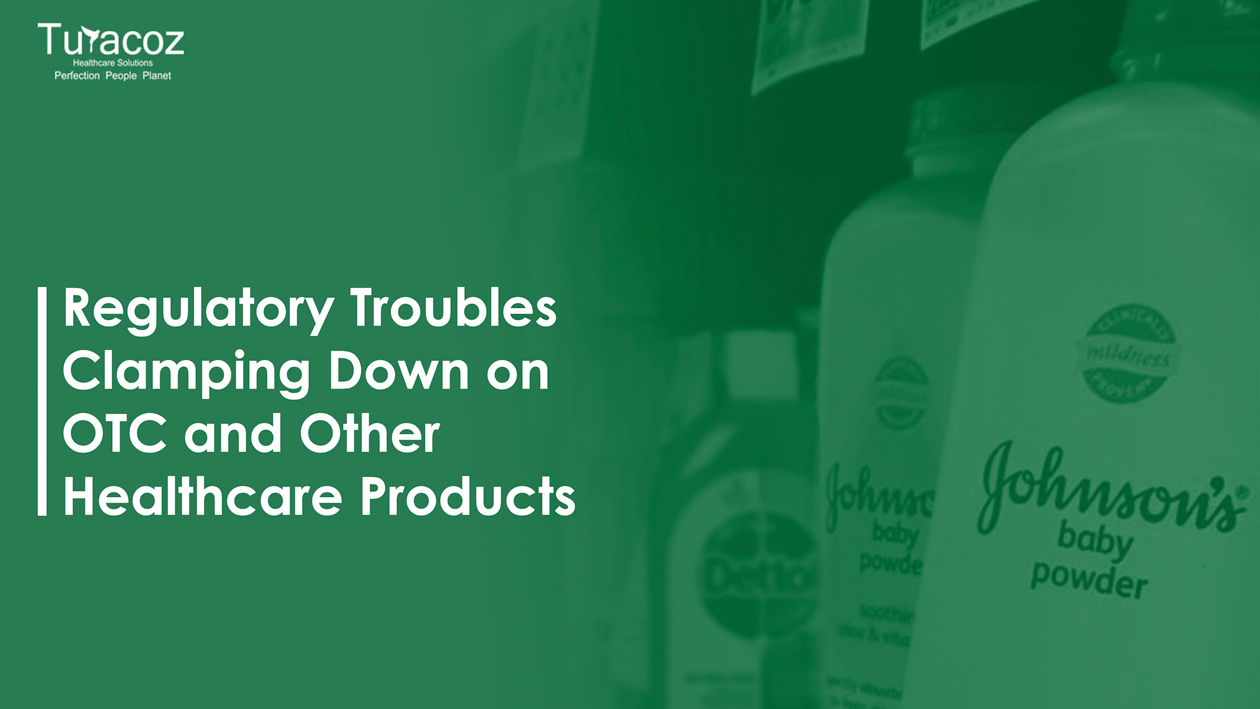 The regulatory authorities have been on fire lately. They are vigilantly sniffing any suspicious and harmful substance in healthcare and OTC (Over the Counter) products. They are working towards the standardization of products which has added to the woes of some famous names as well.

The most popular baby product brand Johnson & Johnson lands into trouble again. This time The Rajasthan Drugs Control Organization has indicated that two batches of company’s “No More Tears Baby Shampoo” had ‘pernicious elements’, to which J&J, not long ago, has classified as carcinogen formaldehyde and has denied the test results.

Only a month ago, the US healthcare colossal got clean chit from the government and proceeded again with the production of their baby powder at their plants in India. Now they are encountering troubles with the baby shampoo and are on the radar of domestic drug regulatory authorities.

This is a serious threat to the image of J&J and their well-established market in a place like India. Two batches of J&J’s baby shampoo failed the quality test, as per the reports by Indian Express. The samples of the batches BB58204 and BB58177, to be expired in September 2021, were tested positive for harmful and objectionable ingredients.

These samples containing one lakh bottles of “No More Tears Shampoo” were manufactured at Baddi, Himachal Pradesh. Rajasthan government has asked to withdraw these adulterated batches and has demanded the regulatory authorities of other states to follow the litigation.

The regulators found the presence of formaldehyde in the samples of shampoo. Formaldehyde has been declared as a probable carcinogen substance by the US Environmental Protection Agency. The studies conducted in past have shown a link between formaldehyde and a greater risk of leukemia.

Rajasthan drugs auditors relayed a notice to drug control officers to withdraw the available stock, so that the stocks of these drugs are not used by anyone and the consumers are safeguarded. Further, it was also notified to take appropriate actions in accordance with provisions of the Drugs and Cosmetics (D&C) Act 1940 and rules made afterwards.

J&J has though, denied any such allegations. It has claimed that neither did the government revealed the method of testing used and nor did it state the details and quantitative findings. A J&J spokesperson said that the samples were drawn at the start of this year and the company has extended full support during the whole process.

J&J has declared that they extend their full support to Indian regulatory authorities and act according to their regulatory requirements. The US healthcare giant has also applied for re-testing of their samples at Central Drugs Laboratory.

Reviewing of dispensations to Dettol, Savlon and other antiseptics, by the panel

Dettol, Savlon and other products of similar nature are liberated from getting a sale permit, as per Drugs and Cosmetics Rules, 1945. An expert panel now has been set up by Drug Controller General of India (DCGI), which will be deciding whether OTC healthcare products will be proceeding further with an exemption under disinfectants and antiseptics.

According to clause 12, schedule K of the Drugs and Cosmetics Rules 1945, “substances intended to be used for annihilation of vermin or insects, which produce disease in human beings or animals, like insecticides and disinfectants, can be stocked, exhibited and sold without a license.”

Currently products like Savlon, Dettol, etc. fall under the clause 12, schedule K. This ensures that they do not need any sales license. This matter, however, has now been consigned to a sub-committee for further investigation. It shall also be reviewed whether these products can be kept under the category of OTC products or ‘no-prescription’ products.

Dettol is a popular first-aid product, used as a disinfectant and it contains additives like terpineol, chloroxylenol and absolute alcohol. The reason for this action is to ensure the safety measure of these products. Such products, being a crucial part of infection control strategies in healthcare regimen, are required to be monitored closely. It is also because these products play a major role in antimicrobial resistance, so their manufacturing and usage becomes even more crucial.

The US Food and Drug Administration (FDA) also took a similar action in the year 2017, when it shut down the use of 24 elements in OTC antiseptic products like handwashes and surgical hand scrubs.

Things not going smooth for Claire

No one can deny the fact that cosmetics have been deeply rooted into the daily routine of our lives and hardly any woman walks out without wearing makeup or using any sort of cosmetic products. The widespread use of cosmetic products has made it even more important to screen them carefully in order to avoid any possible harmful effects.

With a wide range of cosmetic brands available, more vigilance is required. Recently, a popular cosmetic brand, named Claire, has been under the radar of FDA.

FDA called on Congress to alter the rules for cosmetic safety as it broadcasted an alert for consumers against 3 of the products sold by Claire Stores Inc. This was because these products were tested positive for asbestos- a product that causes cancer. The presence of any carcinogen element in any product is not acceptable.

The 3 products against which the warning was issued are:

The retailer, who just escaped from the jaws of bankruptcy, stated that there is no proof that any of the product sold by Claire is risky. Though, as a measure of precaution, the retailer removed the stated 3 products from the store and any other such product that was talc-based.

Claire, however, has challenged the test results shown by FDA and says that it has misunderstood fibers present in the products as asbestos.

FDA has been under huge pressure to screen for any asbestos presence in the products, especially after the J&J case, where asbestos was found in their baby talcum powder. The reports from the Reuters stated that J&J was aware that their talc, in raw form, contains asbestos, from 1970s to early 2000s.

No favor to flavor: FDA plans on imposing restrictions on Flavored E-cigarettes sales to teens

The commissioner of FDA has decided to put a restriction on the sale of flavored e-cigarettes in order to minimize the rate of teenage vaping.

Vaping is practice of inhaling and exhaling vapors formed by an e-cigarette or electronic cigarette or any related device. The issue associated with this is that youngsters, especially teens might take up vaping as an alternative less harmful than smoking.

The agency has suggested in a proposal that the stores cloister flavored electronic cigarettes to areas prohibited to anyone falling below the age of 18. All retailers inclusive of departmental stores and gas stations will have to mandate the age verification of the customers.

There are enough proofs to show that youngsters are drawn towards flavored e-cigarettes and the minors have access to these from physical and online stores, despite of the fact that there are federal restrictions imposed on sale of such items to anyone below 18.

The increasing rates of teenage vaping is a serious concern over the past few years. Around 3.6 million middle and high school kids confirmed that they were involved in vaping, as per a study conducted by Centers for Disease Control and Prevention.

Previously, FDA repressed teenage vaping by issuing a threat warning to put a ban on maximum flavored e-cigarettes and asked retailers to stop selling them to minors.

The recent proposal states that the sellers need to filter the sale of such items according to the area. If any store caters to customers of all age group, then they might be required to have a separate space/room for such products, so that minors don’t have direct access to it.

Though many retailers aren’t happy with this and have even threated to fight against these stipulations in court. Conservative groups and vaping trade associations also seem to be in no mood for support and have stated that the efforts made by the agency to regulate e-cigarette industry corresponds to government overdo.

The new stipulations are not applicable on menthol, tobacco or mint flavors as the FDA wishes to keep them available for adults who are trying to quit volatile smoking with the help of e-cigarettes.

Meanwhile FDA plans to monitor the use of mint or menthol flavored e-cigarettes by the youth and upon finding excessive use by the youngsters, it would reconsider the exoneration of these products. This step is not going to be in favor of Juul labs, the vaping colossal. Juul has already shifted the sales of its products online, other than the mint and menthol flavored ones.

The proposal made is still in the draft phase and is required to abide by a 30-day comment period prior to its finalization. This regulatory approach is bit off-beat as it is neither an autonomous guideline nor a new rule. FDA has mentioned that if the e-cigarette manufacturers sell their products in contravention of the solicitation, then their products can be lifted off the market and asked to apply for approval from the agency. FDA can carry out this action under its discretionary enforcement authority.

With time, more emphasis is being given to the safety and efficacy of healthcare and cosmetic products. Proper measures should be taken to avoid the presence of any harmful substances in these products and ensure the safe usage. The safety and health of consumers is becoming a primary concern.

The regulatory authorities across the globe are working hard towards maintaining the standard of the manufacturing of these products by implementing stricter measures of screening and making amendments to the safety rules.

With the changing regulatory requirements and parameters, even the big giants need to buckle up and prepare for the best and ensure quality products from their end to stay out of any likely troubles. How things unfold in the future, would be a sight to see.

Turacoz Healthcare Solutions, being a medical communication firm, realizes the significance of drug safety and efficacy and believes that the manufacturing standards of the drugs and cosmetic products should be at par with the regulatory standards and rules. Consumer safety is a priority and the regulatory authorities are working on the same by fastening the grip on major healthcare and OTC product players, to ensure that the products are of standard quality and their consumption is safe.

Turacoz offers quality and cost-effective medical writing services. To know more about our services, write to us at hello@turacoz.in